Sometimes, thinking about the role of art in our lives becomes abstract, so we forget how fundamental art works can be in transforming our lives.

For the ancient Greeks it was simple: catharsis, a process of purifying and purging one’s emotional state of being. As you watched Agamemnon or Antigone or The Trojan Women, you rid yourself of emotions like fear and pity, resulting in the renewal and restoration of your spirit. Of course, other functions of art, such as social criticism and satire, were evident in classical times too, notably in the old comedies by playwrights like Aristophanes or in new comedies my the likes of Menander. So I suppose even back then, things were more complex than one might guess from a high school course in classical Greek theatre.

What made me think about all of this was an article I read, which appeared in New York Magazine earlier this year. Alison Bechdel, whose graphic novel, Fun Home, won the Tony Award for Best Musical last weekend, was asked what seeing her true life story transformed into a musical was like. She responded by writing a comic strip in which she makes some observations that really moved me. Have a read, and see what you think. 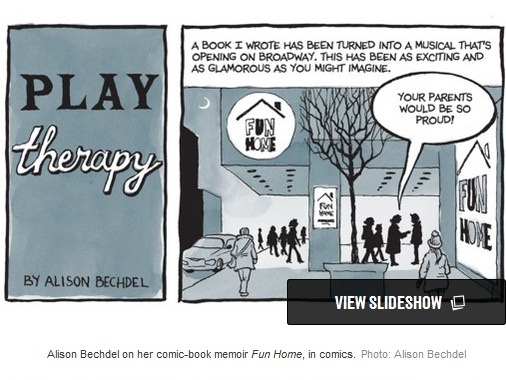 What does art do for you? Do you have a musical that you find transformative or healing? I know Fun Home feels like that for me, particularly because of the sense of identification it creates within me. I’d love to hear about yours. Head to the comments box below, and let’s chat.