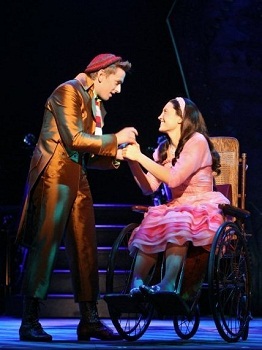 There are three separate elements of divine integration in musical theatre: the book, the music and the lyrics. For most people, understanding technique when it comes to book and lyrics is more concrete, while the understanding of musical techniques tends to be more abstract and grounded in an emotional or spiritual response. It’s easy to spot bum rhyme in a lyric (‘Listen – Nessa / Yes? / Uh – Nessa / I’ve got something to confess, a / reason why, well – / why I asked you here tonight’), but just what is wrong with “Defying Gravity” when it makes teenage girls the world over feel so good about themselves?

For many followers of musical theatre, this opens up an all too easy gap whereby all responses to musicals are deemed subjective. It is in the understanding of musical theatre technique and in the construction of a critical framework based on that understanding that objectivity in evaluating a musical’s success or failure can arise. As conventions shift over time, what was good once might appear less so now, and what was once considered repellent might today be viewed as ahead of its time. In the 1920s, for example, a great score was what was primarily needed for a musical to be considered great, so while lyrics received considerable attention, the books did not. So while we might not be seeing full scale, unrevised productions of Lady Be Good or Oh, Kay! today, “Fascinating Rhythm” and “Someone to Watch Over Me” still pop up in concert repertoires and jukebox musicals based on the Gershwin songbook. Conversely, a show like Richard Rodgers and Lorenz Hart’s Pal Joey earned mixed reviews for its initial production in 1940, but really started getting street cred in the following decade when audiences could accept an anti-hero as the protagonist in a musical.

Richard Rodgers – undoubtedly a great composer, but what is it that makes his music better than Burton Lane’s?

So maybe the challenge for the week is to go and learn about one technical aspect related to the craft of writing the book, music or lyrics of a musical and to think about it in relation to your favourite musicals. Try to get objective about your subjectivity, and then see what comes of that.

Although the three parts aiming for divine integration in musical theatre are distinct art forms with distinct roles, they are one in purpose. They are perfectly united in bringing to pass the possibility of a great musical. And there are many: South Pacific, Gypsy, Fiddler on the Roof, Follies, The Wild Party and A Gentleman’s Guide to Love and Murder are just some of the great musicals we’ll all be watching and listening to for years to come.