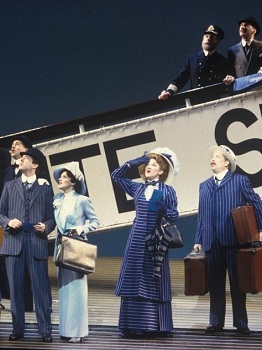 Above: The original Broadway cast of TITANIC

Although I’m a fan of the show, Maury Yeston and Peter Stone’s Titantic has its critics. One of the most common criticisms I’ve heard in regard to the show has to do with its lyrics. So I thought I’d give the cast album another listen with this particular focus at an entry point.

Generally speaking, I don’t find the lyrics to be bothersome, although there are a few instances – fewer than a dozen, I’d say – where the lyrics certainly pull you out of the drama long enough to do a double take, merely because of something that doesn’t sit quite as well on the music as it should, because of a scansion that doesn’t work itself out properly, because of something grammatical that isn’t quite right or because of other little problems that get in the way of the expression of the thought in the lyrical line. But they’re fairly minor, isolated moments for the most part – for example, this misstep in the lyric for “Mr. Andrews’ Vision” in this section of the song:

And then it filled to the top
Our separate watertight compartments
And began to overflow…
Because the walls in-between the compartments
Are too low!
She’s only sinking because these buildings
Stop a deck too low!

There’s a problem with the scansion here as well as with the way the lyric sits on the music. It’s awkward and self-conscious and pulls you out of the drama when you’re listening to that part of the song because you’re aware that something is not right, even if you’re technically not aware of what it is. 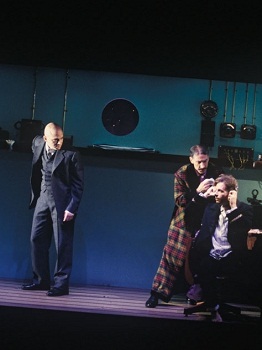 Above: The original cast of the Broadway musical, TITANIC

Going into specifics about the more troublesome spots, there are two songs that I feel don’t get where they want to go, lyrically or musically and one that doesn’t quite work insofar as the music is concerned. The two songs are “I Have Danced” and “Still”, and the third piece is “The Blame”.

The problem with “I Have Danced” is that the lyrics veer sharply between overly conversational phrases and somewhat overstated bombast, placed over music that, while lovely, neither supports the shift between these two very different modes nor marries particularly well with what’s going on dramatically. The song almost gets it right by striking a balance between the two towards the end of the number, but ultimately it is an underwhelming piece of character work.

“Still” has similar problems, although here the dramatic statement is far clearer. The sentiment behind the song is a touching one: simple, straightforward and about as emotionally honest as you can get. But Yeston tries to play around with the words too much, losing the simplicity of the thought and undermining the emotional truth of the moment by doing so, and the music sounds strained when it should soar and allow the characters transcend their doomed reality. The song begins to go where it needs to in the bridge; if only the rest of the song could get there too, it would be a perfect number.

“The Blame” get the lyrics right and much of the song’s musical composition supports what is going on – but it’s ultimately not specific enough throughout when it comes to the music. Because the song tries to stick too tightly to a structural pattern, each character ends up repeating blocks of melody established by another character. This could be used to great effect, but in this case it remains a proposal that hasn’t really been fleshed out in the song itself. It’s as if dialogue that existed between the characters was planted onto an established composition, without any thought as to whether the music matched up perfectly with what each specific character was saying and feeling in every moment in the song, so characters who are facing off in this scene sound like they’re agreeing at times or sound less connected emotionally than they should be. Basically, the music doesn’t completely fulfill its task in conveying what’s going on dramatically in the scene in a specific and complex fashion in certain parts of this song.

Other than that, I feel that Titanic remains, more than a decade later, a remarkable score with some memorable lyrics.