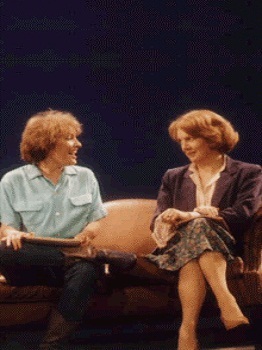 Above: The original production of BABY on Broadway

My sister is pregnant and we just found out she is going to have a little girl, so of course, the musical Baby has been on my mind this week.

Baby has a fantastic score – thank goodness for the cast album which showcases some great numbers (“The Story Goes On”, “The Ladies Singing Their Song”, “I Chose Right”, “Baby, Baby, Baby” – you could go on and on) – but the book of the show has always been a problem. I guess the show never decides if it’s going to be a concept musical or a book musical and flounders somewhere in between, never fully serving the characters it presents or the drama inherent in the process of pregnancy and childbirth. The score of the show is the main reason why the show has remained popular over the years; indeed, the publication of the vocal selections has seen the show’s songs work in many a cabaret setting, which is where David Shire and Richard Maltby Jr’s work seems to play best. The original 1983 book is something you have to deal with to make the show work.

Of course, the show has gone through a process of revision during several workshops during the last fifteen years. The first of these, which took place in the Roundabout rehearsal studios in 1999, made the following changes, as documented by Sean McGrath and Kenneth Jones on Playbill:

Unlike the original production, the workshop script has the older of the three women (Arlene, played by Cass Morgan) losing her baby to a miscarriage and shows the couple (the husband, Alan, is played by Richard Muenz) struggling with the loss.

The score has not changed considerably, but some lyrics have been altered. Reprises of “Fatherhood Blues” and “I Chose Right”, and a restructuring of “Two People in Love”, were added in rehearsals. Arlene’s searching ballad, “Patterns”, cut in Broadway previews but recorded on the cast album, has been reinstated. The number, heard in Maltby and Shire’s revue, Closer Than Ever, is generally considered one of Maltby’s strongest and most character-rich lyrics.

Another workshop was done with LaChanze in 2002 and there were rumours of the show appearing in the 2003-2004 Roundabout season and that version of the show (billed as the 20th Anniversary Production) played the Paper Mill Playhouse in 2004. Another reading was done for Roundabout, this time with Victoria Clark and Michael Rupert and a concert with Faith Prince, Alice Ripley and Kerry Butler was produced in LA last year. In 2006, Maltby also mentioned another reading of the show with Clark and Anika Noni Rose on Playbill:

We [recently] did a reading with Victoria Clark and Anika Noni Rose, and it looked liked the Roundabout was going to do it, but it didn’t work out.

As it turned out, Clark did yet another reading of Baby, this time a staged reading at CAP 21.

All this has me wondering how the revised version of the show plays. Did anyone here see any of the revised productions? What do all of you think about the show? I’d love to hear what you think!