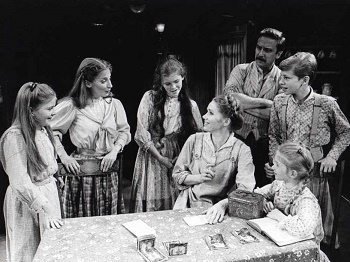 It’s been almost thirty years since the opening of the last musical that Richard Rodgers composed, I Remember Mama. Running for only 108 performances in 1979, this rather sentimental musical featured a book by Thomas Meehan and lyrics by Martin Charnin and Raymond Jessel. Based on an overwhelmingly successful play by John Van Druten, which was produced by Rodgers and Oscar Hammerstein II in the 1940s, which was in turn based on the Kathryn Forbes’s memoir, Mama’s Bank Account, I Remember Mama tells the tale of a family of Norwegian immigrants living in San Francisco in the early twentieth century.

Chiefly remembered for the (mis-)casting of Liv Ullman in the central role, the original production of I Remember Mama earned itself a spot in Not Since Carrie: Forty Years of Broadway Musical Flops. Such was the initial failure of the show that an original cast album was not recorded. It was not until a 1985 studio album was released that the score became available to the general public in the form of a cast recording. All things considered, this was not the ideal swan song for Rodgers after his auspicious career, was it? 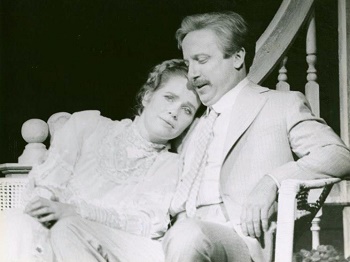 Liv Ullmann and George Hearn in I REMEMBER MAMA

When I Remember Mama surfaces in discussions, as it does in musical theatre forums on social media from time to time, nobody who remembers seeing the show says that it was brilliant – and many say it was an unsalvagable disaster. But those who don’t say it was a complete failure say that it was a sweet show that came along thirty years too late. Listening to the recording, it does rather remind me of Meet Me in St Louis with a little bit of Act One and Little Women thrown in for fun, and it certainly is an old-fashioned show. I think its heart is in the right place, and its certainly easier looking back at it as a nostalgic piece of work now than it must have been in 1979.

In its favour, I Remember Mama has some lovely melodies by Rodgers. I’m rather fond of “You Could Not Please Me More,” which seems to achieve what “An Ordinary Couple” from The Sound of Music set out to do. In fact, I think that it is the better song of the two, even if its lyric could take one on more of a journey. “When?” is also lovely, with the music once again outshining the lyric.

Indeed, the lyrics of I Remember Mama are often pedestrian. A good example of this quality is in evidence in “Ev’ry Day (Comes Something Beautiful), a number which aims to list things in the world that are ineffably beautiful. The very idea of the song seems counter-intuitive: how can one describe imagery that can’t be captured in words, in words? And when the score dips into comic numbers, the results are mostly poor. The two songs written for Uncle Chris are clunkers. Actually, the music of “Easy Come, Easy Go” has a pleasing build, and there’s some glee-inducing counterpoint. It’s the lyrics – cliché after cliché – that let it down. But there’s no such defence for the choruses of the song that introduces him: “Uncle Chris” is a most disagreeable song.

There are some charming character pieces, including the number that establishes Katrin’s desire to become an author, “A Writer Writes at Night”. The number also helps to establish the relationship between Katrin and her Mama as well as, more importantly, lending some context to the frame story, something that the musical proper could afford to incorporate more often. “Fair Trade,” a second act number that introduces the cameo role of Dame Sybil Fitzgibbons, is great fun, as is its reprise.

When the Toronto Civic Light Opera Company, a community theatre group, produced the Canadian premiere of I Remember Mama in 2006, it was a successful holiday show over that year’s Christmas season. Word is that the company tinkered with the book and score, although there seems to be no record online of what they changed. With a general consensus that the show could have been and should have been better, perhaps this is a show that is a serious candidate for an official, sensitive revision. There are supposed to be many cut songs that might serve as alternative material, and there’s enough source material to use should the book need tweaking. There’s no real reason that this shouldn’t be a reliable seasonal show for families to enjoy.

So what are your memories or thoughts – good or bad – of I Remember Mama? Head on to the comment box and share them with us!