TITANIC: the Broadway Musical vs the Blockbuster Movie

Above: Martin Moran in TITANIC

In 1997, two different versions of the “Titanic” story were told in two different styles in two different mediums. The film offered Leonardio DiCaprio and Kate Winslet frolicking in a fictional love story set against the backdrop of the ill-fated ship of dreams, while the musical used the stories of the real life Titanic passengers as a basis for telling its Robert Altman-like version of the tale.

Some people criticise the musical version of Titanic for its approach, saying that that one becomes less invested in the multiple stories included into the narrative, as opposed to the approach that the film takes by focusing primarily on one couple and against the backdrop of the sinking of the ship. I don’t think that this is necessarily true, and it would be easiest to counter this criticism with the simplistic argument that Titanic walked off with the Tony Awards for Best Musical, Best Book of a Musical and Best Original Score (while also earning plaudits for its scenic design and orchestrations) in its debut season. Of course, we all know that the number of awards a show wins is not directly proportional to how good it is, even when – as in this case – the argument counts in the favour of a show one likes, so I’ll have to tackle things from a different angle.

The difference, as I see it, is that this kind of storytelling empowers the audience with a greater choice as to which stories they invest in. One is not coerced into investing in one particular character or couple’s story. I, for example, find the whole arc of Bride’s character very interesting and feel completely invested in what happens to him. For somebody else, that character may be Barrett or Kate or Alice Beane. It’s about shifting the way that one invests in the characters, rather than eliminating any kind of investment whatsoever.

Above: The original Broadway cast of TITANIC

The show is notable for its numerous characters, each based on actual people who were on the Titanic on the night that she sank, although some historical details have been manipulated for the sake of the drama. Peter Stone’s book skilfully interweaves their stories, striking a balance between the characters and making them all distinguishable from one another. Perhaps there is one exception, in the depiction of Charles Clarke and Caroline Neville, who are not developed well enough in either the book or the score. Like everyone else, they get little vignettes, but these seem less substantial than those given to other characters, and then suddenly Charles gets the most beautiful verse of “We’ll Meet Tomorrow” close to the end of the show. But have these characters earned this kind of payoff? I’m not convinced. Instead of coming fully into their own, they merely seem like the other second class couple – the one that isn’t “Edgar and Alice”.

The original cast who brought these characters to life included some of Broadway’s finest: Brian d’Arcy James, Michael Cerveris and Victoria Clark among them. My favourite? Martin Moran as Harold McBride. He really squeezed every inch out of his material to create the character and, if you listen to the cast recording, you can see how precisely he makes vocal choices that convey the spirit and emotional state of the person he’s representing. He also manages to find a build in his main number, “The Night was Alive”, without just letting rip towards the end and thereby destroying the foundational work he has put into his characterization. By the time it gets to the reprise “In Every Age” at the end of the show, you can hear the change caused by the experience of the ship’s destruction but this remains sharply within the scope of the character’s established pattern of expression. It’s sophisticated and subtle and it works phenomenally well.

Above: Kate Winslet and Leonardo DiCaprio in TITANIC

Titanic is a great show. A different kind of musical if compared to the standard Rodgers and Hammerstein musical play, to be sure, with its multiple narratives and multiple conflicts against a backdrop which unites all the characters. Expecting a grand narrative structure isn’t going to get you anywhere with Titanic: it’s not about a boat that sinks; it’s about how that boat sinking affects the people on board, how the boat was a microcosm of society at that time and what that means socially, economically and personally. All of these things are distilled into the characters and the vignettes in which they appear and this leaves one with two choices. One can either engage with what is on stage and take something away from the show or leave, disappointed that it wasn’t a traditionally structured piece of musical theatre like The King and I. But form follows content – as Stephen Sondheim puts it, content dictates form. To create a traditionally structured show based on the tale of the Titanic would mean contriving a plot as was done for the film and that was clearly not the kind of story that Maury Yeston and Peter Stone wanted to explore theatrically in relation to this subject matter.

That’s not to say that the approach taken by James Cameron in the film is invalid. While some might say that putting the fictional Jack and Rose front and centre, the film romanticises one of the great tragedies of the 20th century. I take the point, but I’m not sure I agree with it. I think it is up to people do to some thinking about the context of the story and make the connections for themselves. After all, James Cameron isn’t making a documentary; he’s telling a story that has the sinking of the Titanic as its backdrop, not reporting the event in itself. 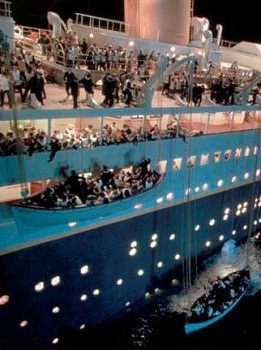 Above: The ship sinks in the film of TITANIC

It’s the same kind of thing that South Pacific does, setting a love story against the backdrop of a real event. World War II was tragic, yet I wouldn’t say South Pacific romanticises it, not in the sense that it renders the War in an ideal light. Certainly we do see the devastating effects of the war – the death of Cable, for example – but we also see the devastating effects of the sinking of the Titanic, and to a far greater extent than we see the effect of the war in South Pacific: families that are separated, lives that are cut short and so on. I haven’t seen the film in years, but I still remember the Irish mother and her children who are doomed because they are trapped in their quarters, perhaps even more vividly than some of the effects sequences or the main love story.

So I think that, if you take the whole film into account, and remember that there is more to it than just the love story between Jack and Rose, the tragedy of the Titanic is clearly appreciable, even if it’s not the primary focus of the film itself.

Does that mean that the film should be adapted for the stage as a musical, with Rose belting “My Heart Will Go On” as high as she can? Not at all, and given the huge part that spectacle plays in the film, a stage production couldn’t be half as effective in that regard anyway. Sure, there is a sense that the characters in the film could break out into song, but that’s because Titanic is basically a melodrama and relies a great deal on the score to support and create emotional identification with what is happening in the film. But I do think that a musical based on the film would be a bit of a “why” musical.

Above: Debbie Reynolds as THE UNSINKABLE MOLLY BROWN

That said, to play the devil’s advocate, I’m not sure that’s synonymous with the musical Titanic being the only adaptation based on the incident. After all, we already have The Unsinkable Molly Brown! And the point of creating another stage musical would be because of something that differentiates the two, for example using a fictional love story against a historical backdrop rather than a show where the historical backdrop itself is the focus. In film, there are several different versions of the Titanic tale, so why should an existing version be the only argument against another vastly different stage production?

Yes, Titanic is a great show. In terms of Yeston’s work, only Nine competes with Titanic for top spot. Phantom is a triviality; Grand Hotel is an example of superb efficiency rather than transcendence; and Death Takes a Holiday just didn’t come together in the end. Would the movie make an equally great show? I’m not convinced, but the two contrasting narrative approaches taken by the respective vehicles are both valid approaches.