Monday Meditation: Online Musical Theatre Forums Got Over Me 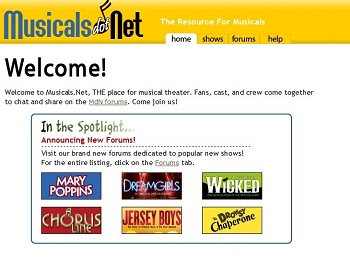 When I first dialed up and connected in the 1990s, I was fascinated to discover online communities like rec.arts.theatre.musicals and Musicals.Net, virtual places inhabited by fans of musical theatre, who could interact with one another and discover more about musicals. Later on, I discovered places like Finishing the Chat, All That Chat and the message boards at BroadwayWorld. I became a regular poster, particularly on Musicals.Net and Finishing the Chat, where I used to contribute daily. Used to. Not anymore. The landscape of the Internet has changed. Social media platforms like Facebook, Twitter or Pinterest have provided ways of interacting with those people with whom I connected more conveniently; the knowledge base of the Internet in general has become more vast and more accessible; and the way that sites like these are run – sometimes in response to very challenging realities, like spambots – have all changed my perspective on interacting with people in forums such as those mentioned above.

Take Finishing the Chat, for example. This board used to be a thriving hub of activity for all things Sondheim, as well as for wider musical theatre and off-topic discussion. Nowadays it is a ghost town, not least of all because it became a closed gate community due to the prevalence of spambots. While trying to recruit new members, I discovered just how difficult it had become to join the board. It took a long time for some new applications to be approved, so that often, by the time the friend I had interested in joining was able to post, he or she had lost interest. And when a group of people is stuck in the same place over time, disagreements happen and there is fallout. Finishing the Chat taught me a lesson that these virtual friends more often than not turn out to be fair-weather friends. That said, there are some people with whom I’ve established lasting relationships from my days on the board, some of whom are very dear to me.

Then there’s Musicals.Net, a site that looked very different 15 or so years ago to the way it does today. Starting out as a thread based discussion board, the site was run by an owner who, at some point after switching the format to the now conventional message board format, lost interest in maintaining the site and gave over its administration to a group of moderators that systematically dismantled everything that was successful about Musicals.Net in the first place. They banned regular contributors over trivial disagreements, played favourites and were guilty of using double standards to make site-related decisions. The result was that the site became a desert. Their spin was that “people moved on” and that that’s shy the site changed the way it did. Amazingly, prior to the group of current moderators, the site’s membership base replenished itself and there was always someone new around, ready to discuss musicals with insights into the form. And of course, anyone who pointed this out or objected to an unfair ban or in any way questioned the legitimacy of the moderators actions – including myself, last year – was banned from the site. You see, the problem there was that the moderators accepted their power without accepting the responsibilities of their privileged positions, did not step down when they lost interest in moderating the boards so that they were run in the way that they were set up to be run and made the site about themselves rather than about the community they were meant to serve. Musicals.Net turned into Animal Farm. I contributed a great deal to that site in the decade in the almost 15 years that I belonged to it. I wish I could take back everything I ever put into it. The wasteland that it has become is heartbreaking.

The thing about message boards like these, even though my journey has taken me elsewhere and my approach to them is more detached, is that they are not so much a dead issue for me as a non-issue. I still read the message boards at BroadwayWorld and load up the home page of Finishing the Chat to see what people are posting. Occasionally I will even post something too. But really, I’d rather post here, even if the responses don’t flow thick and fast. They certainly don’t on Finishing the Chat or Musicals.Net anyway, and BroadwayWorld is a bit of a free-for-all where one is as likely to stumble upon a decent discussion as not.

The difference is that posting here means that I’m in control now, both of the extent to which I post and of the ownership of my contributions. I no longer have to engage in trivial debates about where things should be posted, about how a person promoting a genuine lecture series on musical theatre is not a spambot or try to keep message boards alive because nobody posts in them. You see, the landscape of the Internet might have changed, but so have I. I want to write about musicals. Here, I can. And people who visit this site are welcome to discuss them with me, because I want to discuss musicals too. And since those are the very things I sought out in the first place, having this space to do so a very wonderful thing indeed.

This post is a response to “Sex Got Over Me” in Shirley MacLaine’s I’m Over All That and Other Confessions, one in a series of responses to MacLaine’s book on this site in the Monday Meditation column.

This entry was posted in Monday Meditation and tagged All That Chat, BroadwayWorld, Finishing the Chat, I'm Over All That, Musicals.Net, rec.arts.theatre.musicals, Shirley MacLaine. Bookmark the permalink.